The perfect combo for an immersive trip on the outstanding South part of Iceland with diverse landscapes of farmlands, waterfalls, black sand beaches, canyons, oasis of greenery and the spectacular Glacier Lagoon…

Highlights of the Tour

Discover the itinerary
See the Map 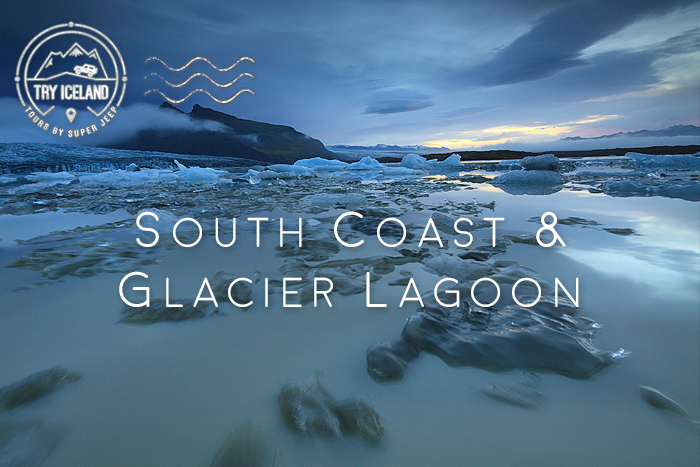 From May to October

Price of the tour

“The Trout Fall” is the largest and the most spectacular waterfall of river Þjórsá. It is also one of the most voluminous waterfalls in Iceland. The average water flow is 360 m³ / sek. A relatively unknown but a very spectacular and powerful waterfall full of beauty, an ideal place for photographers with beautiful surroundings.

A picturesque waterfall of an unusual high of 65m, irrigated by the river Seljalandsá, itself fueled by Eyjafjallajökull glacier. One of the most popular subjects for photographers. As water flows overhang, it is possible to take a path that allows going behind the waterfall. From there, the sight is simply divine. You will discover how fun it is to sneak and disappear behind the water curtain and be out of world for a moment… You will be dazzled by this magnificent site, the power of the water, the beautiful rainbows which go through the waterfall due to the sunlight and the vapor droplets. Sometimes the wind seems to move the water curtain. A magical show of the nature…

Also called Gljúfrabúi, this interesting waterfall is carefully hidden behind a narrow opening in the mountain. Listen the deep roaring, echoing sound of the falling water and become an explorer to find out this magical and intimate place which keeps the purity of a place out of time.

One of the most popular waterfalls in Iceland and one of the 5 largest in the country. An iconic symbol with a width of 25m and a drop of 60m. Getting so close to the base of such a large waterfall is a quite rare experience. You can also enjoy it from above : there are stairs that lead to the top. The view from there is stunning. On sunny days, you can see a single or a double rainbows which are formed with the powerful water splashing.

The name Dyrhólaey means “door hill island” in Icelandic. This curious rocky arm is piercing with a shape which forms a door, an opening to the ocean… It is also a natural parc, sanctuary of birds, where you can observe many species especially the puffins, living symbol of Iceland. From there it is possible to admire a landscape of raw beauty formed by the long beaches of black sand, the unleashed ocean, the cliffs with rugged shapes, formed by a piling up of basalt columns.

This black sand beach is often considered one of the most beautiful in the world. From there you can observe the Reynisdrangar, these lava columns sculpted by the waters, which emerge from the ocean. These dark and towering formations, the highest is 66m high, are the remains of the piling up of cooled lava. According to the legend, they are ancient trolls who have been surprised out of their caves

It is the most southerly village in the country. After Vík í Mýrdal, nothing else except the waters of the Atlantic Ocean. Its church, a white building with a red roof located on a hill, proudly dominates the modest houses of this village. The ocean on one side, the imposing cliffs of Mount Reynisfjall on the other side. Its isolated location and its magnificent environment have made the character of the village. The wind, the water and the time have carved the different rocky buildings that surround it. There is no place for the superfluous : it is nature, rigorous and beautiful, which lays down the law.

During the trip, you can enjoy the sight of the glaciers : Eyjafjallajökull, Mýrdalsjökull, Vestmanna islands and volcano Hekla. (Depending on the weather conditions).

It is believed that Fjaðrárgljúfur was created around 9000 years ago, by progressive erosion of flowing water from glaciers through the rocks. This magnificent serpentine and narrow canyon is about 100 meters deep and about 2 km long. You can feel the power of the nature on the massive rocky walls with impressive shapes and enjoy an endless view into the valley with the sound of the river as music background.

Skaftafell is a part of Vatnajökull National Park who includes a considerable part of the biggest glacier of Europe. It is a perfect place for nature lovers with a birch forest, shelter of many birds species. The breathtaking scenery of Skaftafell is full of stark contrasts and contains some of the most precious natural pearls of the country. You will enjoy a nice short walk on the glacier edge and will be amazed by the various glacial tongues flanked by jagged mountains, the rugged landscapes, the flora and the fauna… You can feel the magnetic influence of this unique place.

A popular glacier tongue of Vatnajökull, which is one of the largest glaciers of Iceland. You can experience the natural contrasts of the region : vast stretches of black sand and craters which suddenly give a way to bright walls of white ice, with blue highlights – huge and majestic. The spectacular surroundings are marked by rugged and dramatic rock formations thoroughly shaped by the glacier. These wonders reflect the perpetual struggle between fire and ice.

We will make a first stop to Fjallsárlon, a beautiful glacier lagoon before to continue to Jökulsárlón, a major attraction of Iceland, a fabulous and magnificent location where lot of videos and movies were shooting (e.g. James Bond, Lara Croft…). Jökulsárlón is one of the most beautiful places in the world, where the nature proves that once again, she does wonders. The Glacier Lagoon was formed in the 30s and continues to expand since then. The water comes from the melting of the largest glacier in Europe. The icebergs drift slowly into the deep water and the ice gleams with beautiful colours ranging from the brightest white to the darkest blue, through the most startling turquoise… Landscapes of contrast, paradise setting, Jökulsárlón gives the impression to be at the end of the world. The place has the ideal atmosphere for meditation and it is difficult to look away of the multiple icebergs. This calming moment is only disrupted by the sound of ice blocks colliding and remind the ephemeral nature of this exceptional place.

Join the tour
View other Tours

START THE ADVENTURE & BOOK THE TOUR

1. Choose your date on the calendar

2. Select the number of people and click on the green button BOOK

3. Fill the form with your contact information and pick-up location.

– Pay the full amount now : when you click on the button PAY, you will be redirected on the secure server of Borgun where you can validate your payment by credit card.

– Pay on arrival : when you click on the butter PAY, your booking is validated. You can pay by cash at the departure of the tour.